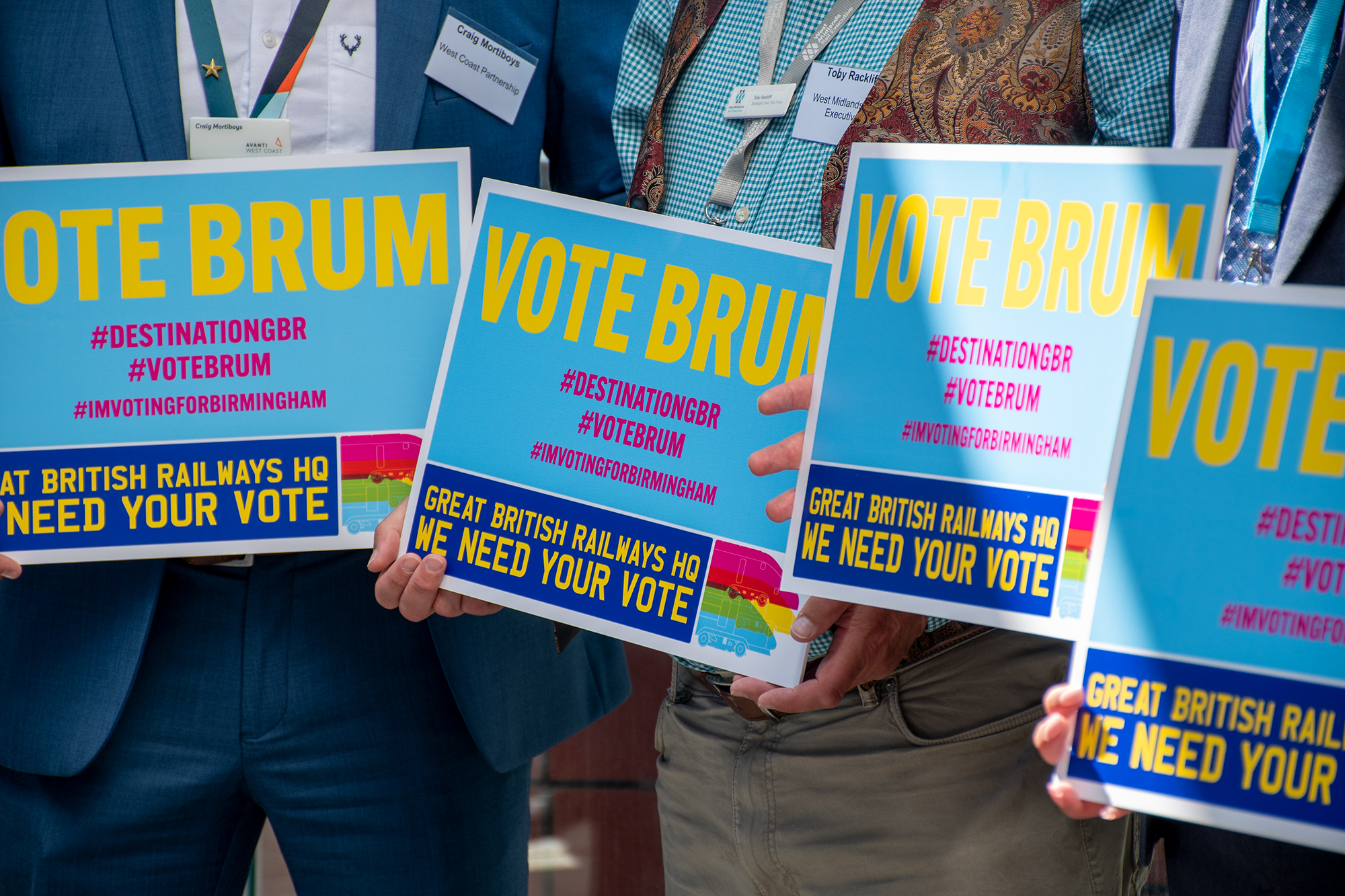 The railways are going through their biggest shake-up in 25 years: this is your chance to help shape the future.

Great British Railways (GBR) is the new public body that will oversee an era of innovation, investment and integration across the rail network. It will decide where trains go, when they go and how much you’ll pay.

The great news is that plenty of people agree, which is why we’ve made the shortlist of places to house the new GBR headquarters (HQ).

Now we need your help: that’s because the government is running a public vote from 5 July to 15 August 2022 to help them decide. So let’s #VoteBrum and ensure the people of the West Midlands have a say in how the railways should be run.

So, why choose Birmingham?

At the heart of Britain’s transport network, we have rail links to the whole of Britain: all nine English regions; north, south and mid-Wales; and the ‘big four’ Scottish cities. It’s no wonder 94 million rail journeys are made in the West Midlands each year – nor that Birmingham is home to three major train operators and HS2.

And with five trains an hour to Euston and Marylebone – and even more to come with HS2 - Birmingham’s links with Westminster are second to none.

As Europe’s youngest city (over 30% of residents are under 35) we have the drive, the determination and creative energy to make big changes. We also have one of the most diverse populations in the UK, with non-white residents accounting for over 40% of our 1 million-strong city, providing us with a real opportunity to drive change and develop rail services for everyone.

Over 40,000 people already work in the rail sector locally – more than any other combined authority area – and thanks to HS2, we now have an unparalleled reputation for engineering consultancy, design and project management expertise. But the opportunities for growth are huge: over 3 million people live within 10 miles of the city centre.

Birmingham and the West Midlands are a hub for innovation. We were the UK’s first Future Transport Zone, helping companies develop, test and trial new products. We’re home to the HS2 Innovation Accelerator, which supports innovative companies to enter the supply chain. And the Birmingham Energy Innovation Centre can help us pave the way to a zero-emission railway.

But that’s not all. As a region, we represent the future of rail research and innovation, thanks to University of Birmingham’s Centre for Rail Research and Education (BCRRE), the UK Rail Research and Innovation Network (UKRRIN), the National College for Advanced Transport & Infrastructure, the Very Light Rail Innovation Centre at Dudley, the Long Marston Rail Innovation Centre and the West Midlands Rail Training Centre at Wolverhampton College. The list goes on. Together with Aston University’s established transport degree courses, our colleges and universities produce thousands of highly skilled technicians, project managers, transport specialists and apprentices every year.

We have a rich railway history

Our rail heritage stretches back to the 1700s, when Boulton and Watt transformed the steam engine, paving the way for the industrial revolution. But we were also at the heart of the world’s first long distance intercity railway in 1838, when the London & Birmingham Railway joined up with the Grand Junction Railway to the North West at Curzon Street station. In the 20th Century Birmingham became was home to a number of major rolling stock manufacturers, building everything from Orient Express Pullman carriages to Eurostar and Pendolino trains, whilst also seeing a renaissance in rail travel with the reintroduction of services on the Cross City and Snow Hill lines.

Today we’re at the forefront of progress yet again, leading innovation, digitalisation and decarbonisation. But we still recognise the importance of our heritage, with a railway museum at Tyseley, the preserved Severn Valley Railway at Kidderminster and the popular steam-hauled excursions to Stratford-upon-Avon that run throughout the summer months. And that recognition will continue with HS2 when the original, refurbished Curzon Street station building will take pride of place alongside the city’s spectacular new station.

We need to level up

Our vision is to create a fairer, stronger city, where all citizens share in the benefits, and live longer, healthier and happier lives.

Birmingham is currently the third most deprived core city in England, and among the least prosperous 10% of local authorities in the UK, with 90% of its wards more deprived than the national average and 40% of children living in relative poverty.

There’s a long way to go, but the GBR HQ will help to generate more business investment, more jobs and more opportunities. Aligning with the levelling up vision, GBR HQ will help bind Birmingham as a city of excellence in rail, inspiring younger generations to join the industry and provide opportunities for skilled employment, by attracting more rail companies to base themselves in the West Midlands. There will even be opportunities to develop career paths in the civil service, thanks to the government departments that have already relocated: that’s good news for retaining expertise in the region and great news for local jobs.

Strong public support is a vital part of winning the bid, so make sure you vote for Birmingham and encourage all your friends and family to do the same!

To help us spread the word, remember to use the hashtag #DestinationGBR and #VoteBrum on your posts where you can and copy in @transportgovuk on Twitter, Facebook and Instagram.